In his book, Effective C++, Scott Meyers has something to say about the way he uses lhs and rhs for parameter names: “… two of my favorite parameter names and their meanings may not be immediately apparent, especially if you’ve never done time on a compiler-writing chain gang.”

When Scott wrote this, circa 1992, he must have had GCC in mind, since Clang/LLVM didn’t exist yet. Clang/LLVM fundamentally changed the way compilers were thought about and it demystified a lot of black arts that went into hand-crafted compilers. You can read more about what is Clang or GCC vs Clang here.

The post would use Clang in Windows environment (yes, Clang supports Windows compilations as mentioned in my previous blogs mentioned above). However, there is nothing too specific to Windows in this blog, understanding Clang optimization and reading some Assembly for that is relevant in the exact same way for Linux as well. So, if you are a Linux C++ programmer keep reading, as this post is also for you.

A note of caution before I attempt to decipher Clang optimization flags. Clang/LLVM is a very active project. I am working on the latest released version of Clang/LLVM from April 15, 2021. There have been 12228 commits on the master since this release and I fear what I write might become outdated very soon. ?

Let us take the first example from my “how to avoid a C++ compilation failure” blog post to further understand the optimization flags.

If we run it across the Clang compiler using the command:

Clang compiler silently compiles it and creates an executable a.exe by default. Let us do a quick side-by-side comparison of the behavior of clang against the behavior of Microsoft C++ compiler cl.

The Microsoft compiler is vocal about the compiler and linker versions used and it produces a smaller executable. The question is: What flags should be passed to Clang so that its space optimization is comparable or even surpasses the Cl?

Before we answer this question let us go through the documentation where code generation options for Clang flags are discussed: https://clang.llvm.org/docs/CommandGuide/clang.html. For easy reference I am replicating the information here: 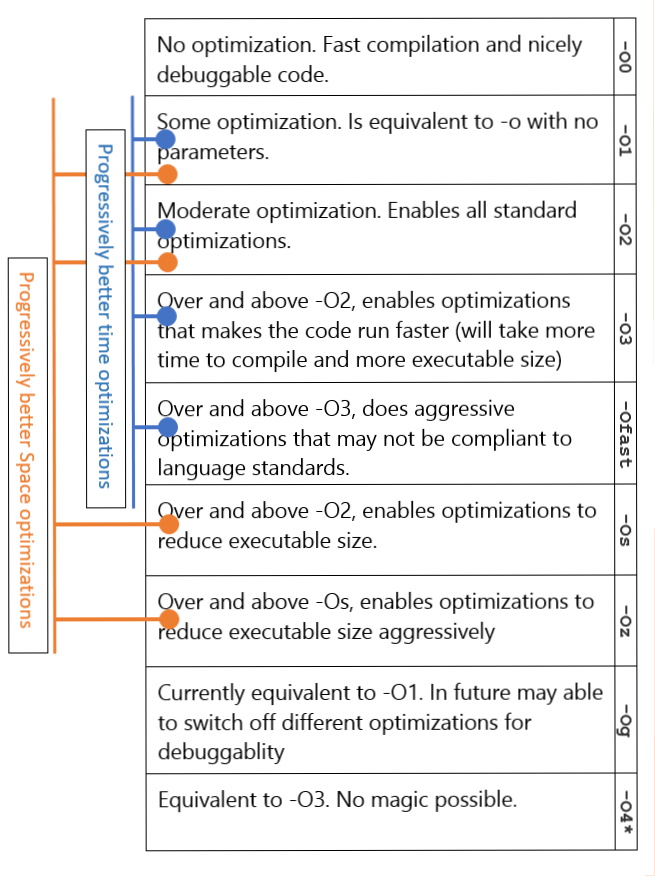 Armed with this information, let us now try space optimization starting with -O1.

gives 236,032 bytes for a.exe. There is a definite reduction in the size of the executable. The default Clang flag is -O0 which generates nonoptimized code.

Note:  The -S flag runs pre-processing and compilation steps only.

The assembly code listing between # — Begin function and #– End function gives a clear picture of optimizations that were done to ConvertStringToPasswordForm.

Let us list the differences we see in the assembly:

This should be seen in the context of what is generated with the -O0 flag:

I experimented further with Clang optimization flags -O2 and -Os on example1.cpp. Here is the space reduction as a table for quick reference:

As can be seen, there is a progressive reduction in the size of the executable while going from -O0 (no optimization) to -Oz (aggressive space optimizations). I am sure, although I have not measured it, that compilation time also increased progressively during these stages.

It may be difficult to analyze assembly code without practice. Reading (as opposed to writing) assembly is a skill I wholeheartedly recommend any developer learns. Take heart, Clang/LLVM has a switch that describes which optimizations were used during a compilation run:

The Opt.txt file will contain the details of all optimizations that were attempted in multiple passes. You will get entries like:

In LLVM, Optimizations are implemented as passes that traverse some portion of a program to either collect information or to transform the program. In the above entry, the pass name is “prologepilog”. You will get full information about different compiler switches from the online reference: https://clang.llvm.org/docs/ClangCommandLineReference.html.

You will also get online help by running clang –help or clang –help-hidden. Yes, there is a hidden help that describes advanced switches available!

Clang Optimization Flags – Are We Done Yet? No!

The heart of Clang is LLVM and a blog post on Clang optimization flags is incomplete without getting to know how to work with LLVM intermediate representation. Here is how to get the IR byte code:

Traditionally, the LLVM bytecode file has the .bc extension. To further work with the bytecode file, you will need tools that are not directly available from the Clang/LLVM installer.

Now you are ready to use CMake. Oh, you have not been introduced to CMake? Go over my blogs, and you will find everything you need.

Let me just show you one tool called opt from the LLVM tools folder. To compile this from the source use the commands:

Remember, this is not a quick build. There are 92 dependent libraries to be built before you can get the opt.exe final artifact. You can get opt.exe to print help and you can see all the optimizations that LLVM supports. Here is a subset of what you get:

As we reach the end of this blog post, I want to introspect. Did I achieve what I set to do, understanding the usage of Clang optimization flags? I believe I did. Clang/LLVM is not a tool you approach just for fun. Understanding the fundamental tool in development – a compiler – and its behavior is central for progressing from a novice to a journeyman programmer. As a programmer you need to understand Clang compiler flags that alters the compilation output. Of course, if you have written an LLVM optimization pass, have done static code analysis using LLVM, or have a deep understanding of Global Value Numbering then you have progressed from journeyman to master. Allow me to Take a bow for the job well done!